Three Ballads of Light and Blue Skies of the Spring 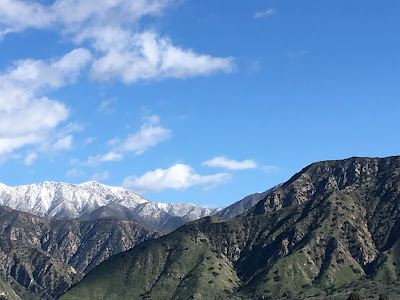 Never say never! I thought I was completely unable to write rhymed poetry and could only write free verse. Until this spring. Now, I know I can write other things as well, though sonnets are still beyond me. I posted my first folk ballad last time, A Ballad of New Sun. In comments, I talked about the identity of the two protagonists - I, you, she, he, mine, his, hers... I decided that he/she would work best, but then, what if you revert the roles? And now he would be healing her? Interesting idea. Let's call this version A Ballad of New Star.

A Ballad of New Sun


He came out of nowhere with head bowed down low
in shame and in sorrow, contrite.

His face wrapped in shadows, cloak black as a tombstone,
he came out of nowhere at night.

He stood there before her with head bowed down low
asking silently, asking for love.

Her hands on his chest, his heart beating wildly,
steady current flowed out from her palms.

Rays of bright light exploded: he flew out of his cage
in a lightning, a flash of delight.

He was free, she was thrilled. Two halves of dark shell
fell down on the ground far below.

In brightness most fine with high outstretched arms
her rose up, the birth of new dawn.

But did he have wings?  We don't know, we can't tell.
It looked like, maybe, he did.

Could he fly? He did fly, bursting out of his shell
like a phoenix, a comet, a kid.

In a lightning of love he ascended so free
shining true, a phoenix  of might.

She was happy, so glad. She laughed out so loud -
such miracle, the dream of her heart.

In a whirlwind of rays comets, stardust and sparks,
divine brightness, more dazzling than moon.

He's her brother reborn, gold prince of new dawn,
floating on weaves of fire and air.

Now her job here is done, her two hands on his chest
healing, breaking the spell of despair.

We are free, we can fly, high above midnight sky.
So much love, so much light, so much care.

It's for us that this Love flows so brightly tonight,
and we sing of new life, of new world. 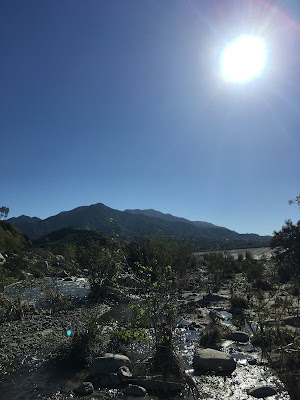 This dream-vision of healing and interstellar flight works well either way, whether she healed him or he healed her, we are all healers taking care of each other's wounds.  In the version she/he, I changed the word "chest" into "heart" - because of basic human anatomy and what men tend to think and do, it is better not to invoke the image of "his hands on her chest" - that immediately has unwanted erotic undertones. Somehow, "her hands on his chest" do not give rise to this association, at least not in my mind. There are people for whom everything has such associations, and those who never think about those things. For poems about spiritual healing, these thoughts are simply a distraction. 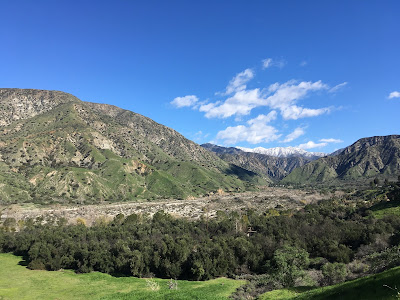 After the rains, on a cold winter morning, the sky was pristine, pure "sky-blue" - without a trace of smog, a trace of chemtrails. Pure azure expanse, turquoise at the bottom, azure high up. I went for a walk by the river. I found a huge, heart-shaped rock. I picked it up and put on top of an enormous boulder that had an indent that served as a shelf for the heart-rock, to make sure it does not slide down, I put a small white rock at the bottom, to help it stay upright, well-balanced. One line came to me, from which the following ballad flew out smoothly. No, I did not carry the rock with me. It was too heavy. I let the boulder carry my rock, it was much better this way. But the poem says something else. Why not? It is just a folk ballad... 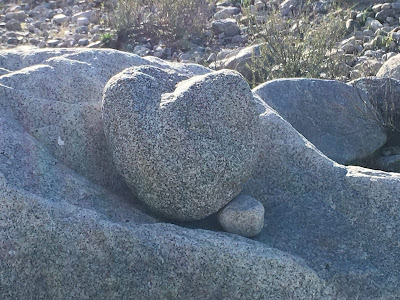 A Ballad of  New Heart

Once I found a rock heart, my heart of hard rock.
I took it to carry with me.

Along muddy shores of the river of time
that flows down in the ravine.

I carry my rock as I walk up the hill
of a thousand stones, all so cold.

The rock now softens and moves in my hands,
it melts into heart of pure gold.

I carry my gold heart up the mountain, up high,
I carry, I carry its weight.

With each step it's heavier, its surface so hard.
Careful! it might slip out of my hands.

I know how the river races down, full of mud.
I'm lucky, I turned to go up.

This weight is for me to carry alone.
It is my heart of rock, my own task.

It starts feeling alive, in the warmth of my hands.
I thought it was only a rock.

I cradle it safely in my two folded arms
as I bring it up high, to the top.

Here the sky is clear blue. Winter storms have all passed.
I look at smooth river below.

I thought it was muddy, full of dirt as it rushed,
but it sparkles with rainbows aglow.

It's my river that flows, my heart changed to flesh.
I discovered my treasure of old.

You will, too, find your heart, change your rock into gold
to cherish, to love, and to hold. 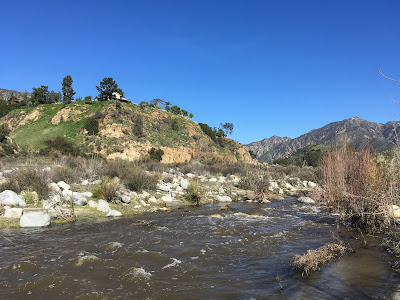 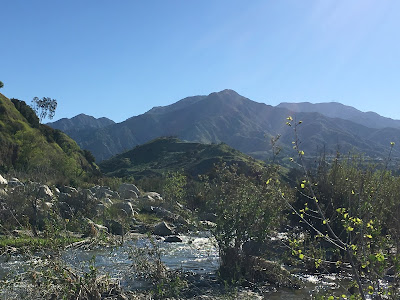 The next folk-style ballad has a different ending from the one I first envisioned. Again, it was originally written in first person, with the angel as a "he" - but to make it more universal I changed it into she and he, her angel. I also changed the ending into a more positive one, from the frozen scene when either of the protagonists could not move, not one step. Ice is melting on the river, so it can flow again. This ballad is based on a very strange and detailed dream I had and tried to describe in my dream notebook. It is so important to write down these strange, vivid and colorful dreams in as much detail as possible right away. They contain useful lessons of how to deal with the present, and the past, how to act in the future. 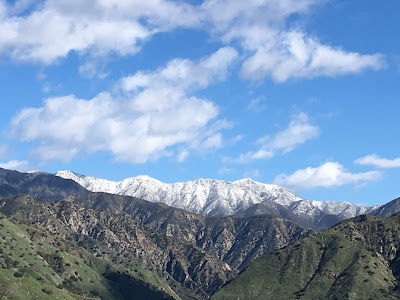 A Ballad of Golden Scroll

Once she saw a path of shadow leading straight to her back,
stretching far, into mists, into void.

With black fog swirling 'round, it was made of despair,
guilt, shame, and remembrance of wrongs.

Now the Sun rose within her, its light poured out through.
She was brighter than bright morning star.

It was time to let go, end this lesson of pain.
The Sun's brightness was seen from afar.

So she rolled up this path of shades and of mists
'round the black hole of tears and regrets.

As it rolled like a carpet, she saw gold underneath,
cobwebs over brilliant gold nets.

The roll was too heavy for her to take up.
She called "help!" Angels knelt on both sides.

All of light, all in white, they shone as they knelt
on one knee, with the scroll of her past.

She looked closer but now only one angel stayed,
shadows wrapped up in dazzling light.

Her past faults and her hurts, he held in both hands.
He was kneeling, her angel at night.

She could see his white wings, opened wide, made of light,
their long tips stretched far, north and south.

The pathway behind her was clear, pure and gold,
shining brightly and smooth like a pearl.

She tied silver cord around the scroll and said "fly!"
End to end of horizon, his wings.

With one sweep, he rose up, carrying her heavy load
to release it on currents of wind.

High above was the speck, in the sky, in the Sun.
It exploded in a shower of sparks.

His huge wings filled the air with his delighted song.
With sweet voice, tender song of her heart.

Pain was gone, she was free. It was bright all around.
Light aglow in her body, her veins.

You should know there's a myriad of angels around.
They will help you break your own chains. 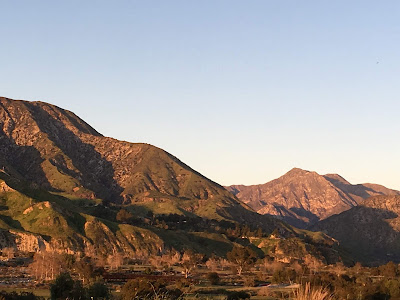 Sometimes my poet friends ask me why am I not pursuing a "proper" more prestigious venue for my poetry. I do this for fun, for the delight of sharing, not for career or glory or honors. I've had enough of those already, plus it is not that important. Sharing the discoveries of how to get rid of darkness and live in the light is much more needed. It makes me feel lighter, makes me smile. I'm as clear as the blueness of blue skies above. For a moment, at least. What more can I ask for? What more do I need? Writing something new I actually like to read. That's perfection, right here, right now. 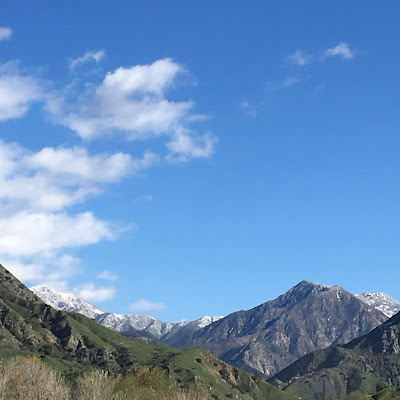 Posted by Maja Trochimczyk at 7:19 AM

Maja Trochimczyk
As an author of seven scholarly books and hundreds of articles and book chapters, I'm well established in the music history world, with two main specializations: Polish music of the 19th and 20th centuries, and 20th-century contemporary music. A former Poet Laureate of Sunland-Tujunga and current member of Village Poets and the Westside Women Writers, I have published over 300 poems in various journals and anthologies. I also wrote five volumes of poems and edited three poetry anthologies. I'm the Acting President of California State Poetry Society, President of Helena Modjeska Art and Culture Club, President of Moonrise Press, and Board Secretary and Communications Director of the Polish American Historical Association. I also belong to the American Musicological Society, and the Polish Institute of Arts and Sciences. The Moonrise Press published 17 books of poetry and music history. I received fellowships and awards from the Canadian & Polish governments, USC, PAHA, City/County of Los Angeles, and American Council of Learned Societies. In 2016, I received PAHA's Creative Arts Prize for two books of poems inspired by WWII experiences of Polish civilians and children. 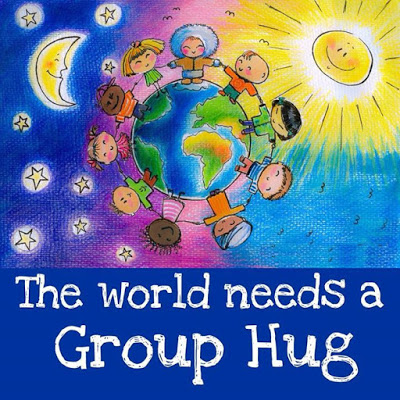 Into Light - Poems and Incantations 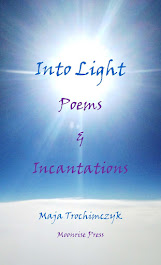 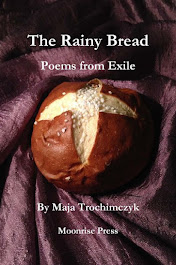 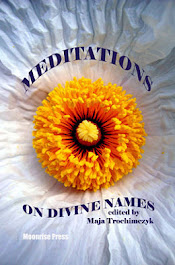 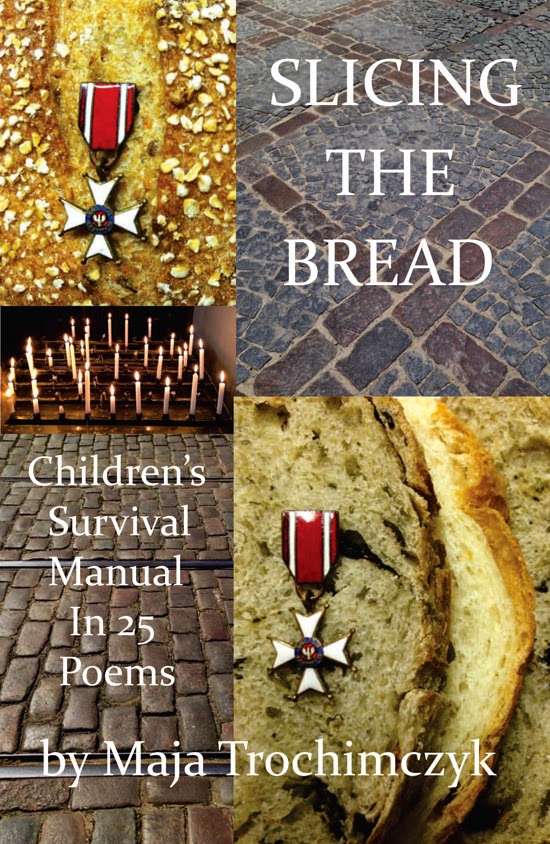 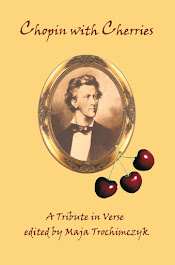 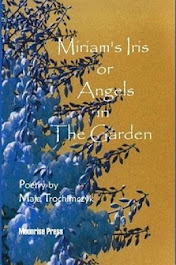 Photos - My Apologies! Google deleted all albums on Picasa! It will take time to redo them.